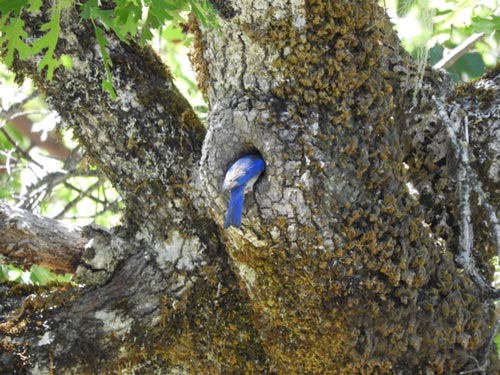 This is a male Western Bluebird bringing food to the nest presumably for the brood of chicks which we haven’t yet seen emerge. We noticed him and his mate about 4 weeks ago hanging out in and around our outdoor kitchen. They have made a nest inside a nearby Black Oak.  Initially we observed the pair together flying, perching and seeming to “flirt” constantly but now they are busy bringing home the bacon for the little ones. Hopefully we’ll get to see the chicks when they’re old enough to leave the nest.

The male pecks incessantly at reflective surfaces like car windows and mirrors and even on our cabin’s metal stove pipe thinking it’s another male trying to get in on his action. We have covered everything—even the stove pipe, so that he doesn’t waste energy fighting off his own reflection.

In her book, Secrets Of The Oak Woodlands, Kat Marionchild has a chapter on Western Bluebirds in which she writes, “Loss of nest cavities to (non-native) house sparrows and European starlings has contributed to population declines, as has loss of nest cavities due to logging, removal of snags and loss of open space.” 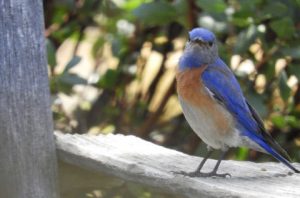