It’s the familiar sound like a sprinkler just went off or a windup toy unleashing itself. The sound of a Rattler is distinct and for those of us who live with wildlife, we know it well. There is so much fear around rattlesnakes. I understand, they can seriously hurt you! What do we do then? Well, firstly, we acknowledge that we live with rattlesnakes and are wary of the places they may be. They love to be where? They love to be under things chillin out. We can almost expect them in the summer under some plywood in the shade or under the house under something else… The point is, watch for them and acknowledge their presence. 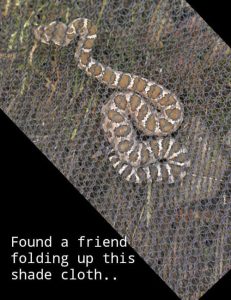 If you do happen to see one, what is your plan is the real question. I know people who like to put them in a 5-gallon bucket and relocate them. I know people who dispatch them. My favorite however, is my friend Kirk, who lives with them and has them help him in his garden. Here’s the story.

Kirk had a mouse problem in his blueberry patch. The mice were coming in every night and totally denigrating his new crop. He tried everything from live traps to not so live traps. There was still a huge mouse invasion happening. It was discouraging as a farmer and he was definitely feeling the exhaustion of the battle. Kirk lives on A LOT of land with A LOT of wildlife. He has ground squirrels so he has rattlesnakes! He had become familiar with his snake roommates, he got accustomed to their hideouts and tendencies. One day, on the way from his house to the barn, he came across a huge fellow passing by and something clicked. He knew that if he could get that guy into his garden, good things would happen! So, with two long sticks he actually helped guide that rattler into his garden!! IT WORKED!! The snake stayed in the garden as his ally helping with his mouse issue. A total win-win situation. They had an understanding. Kirk left him alone and he left Kirk alone and everyone lived happily ever after, except the mice. 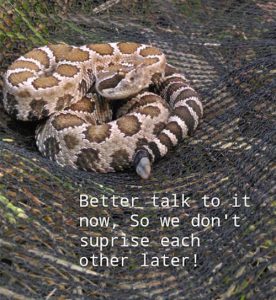